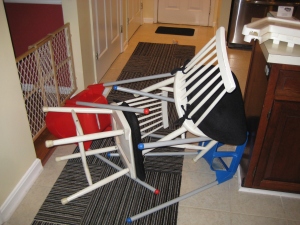 I got desperate while cooking one day. PS, This did not work.

We have considered hot lava and sharp rocks to keep my twins (triplets) in line.

My oldest son barely needed childproofing. We might have added a few outlet covers here and there, but, whatever. In order to be approved for adoption, we had to put child locks on our cabinets and prove that we had childproofed the house to our social worker. Do you realize that this means that we childproofed our home BEFORE he arrived? Eighteen months before he arrived! What is this, New York City? We are not the kind of family that childproofs before a baby starts crawling – much less before a baby arrives – much less 18 months before he arrives. The irony of the adoption home study is somewhat cruel and ridiculous.

Needless to say, as soon as we were approved, those cabinet locks came down. After placement, we figured that we would re-childproof when he started to crawl. We soon realized that, while our son was a whole lot of work, he was just not a climber, or a sneak, or a runner, or a hider. He was never far from my hip, either. He was content to play with the pots and pans while I cooked, and didn’t need to take dinner prep a step further by pulling a chair over to climb on the counter to reach the knives. He was content to read his own books, and didn’t need to take story time a step further by scaling the bookshelf and tearing my novel pages from bindings. He was content to play with his toy tools, and didn’t need to take home repair a step further by sticking real screwdrivers into outlets. He had his challenges, but he was obedient. I knew I was lucky.

Enter twins. Other twin moms warned me: twins will work together to undo child locks. Twins will always have an audience to impress, and will do naughty things from a very young age to make the other giggle. They were right. At the age of 16 months, one of my twins is the ringleader of all three of my children, and I knew that would be his role when he was still in the womb.

Enter triplets. When my niece, who is not much older than the twins, moved in with us, I suddenly felt like I had triplets.

We started out normal enough. Outlet covers, cabinet locks, and we’re good to go, right? Wrong. Anything that is plugged in will be yanked out, and then overturned for the sheer testosterone-y pleasure of it. We had to get those covers that cover the entire outlet and whatever is plugged into it. Later, we just had to get rid of anything that plugs into the wall. The cabinet locks can be undone by the most vigorous twin, and now he can open drawers too. He can pull cutting boards off the countertop onto his head. He comes running for splattering oil and the open door of a 450 degree oven. We gave up and just gated off the whole kitchen. Sadly, that involved drilling into our cabinets. Sigh. No worries, though, because now I will cook long, luxurious meals just so I can have an excuse to stand in there alone. 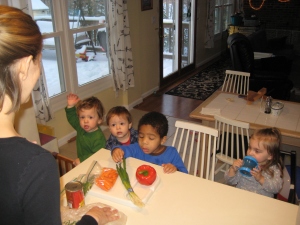 A gated-off kitchen makes a happy momma, and that makes happy kids.

We have a brick fireplace hearth that spans the length of the entire living room, and the right angle of the brick is just at the right height to cause brain damage to whatever neck would land on it wonkily. So we got that “edge-proofing” cushion stuff, which is held on by double-sided tape. That tape was not enough to stop my kids. It came off immediately. Then we tried taping on pool noodles cut in half, and, when that didn’t work, we bought some sort of adhesive pipe cushion for plumbers. No use. Then we just let them hit their heads for a while, until wintertime came and we needed to turn on the fireplace. Now the whole thing is gated off by a long fence. Same story with the TV/music room: we tried to make it work, gave up, fenced it off. My square footage is shrinking. 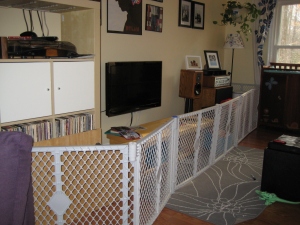 Please note the use of plywood, bungee cords, a heavy ottoman, and a changing table to keep that fence in place.

The kids started climbing on the kitchen table, so we decided to stop using it. Now we eat in the formal dining room that has been gated off… but first we took the rug out. We can’t have four kids under four eating on a rug three times a day. Now we can actually set the table and clear the table without my El Diablo twin pulling a bowl of hot Iranian green chilies onto his face.

The dog crate that fits a 100 pound dog… end tables… record album collection… diaper pails…vent covers: there is no end to the things they try to conquer. (I’ve already retrieved bread, duplos, blocks, and sippy cups from inside the vents.)

Maybe because they are boys, they just want to mount, climb, stand on, or smash every single part of this house. (And, yes, they have plenty of toys, but they prefer the house itself as a toy.) They are like goats who are always trying to stand on the highest tree stump. 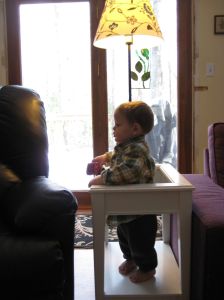 We are constantly removing furniture and adding baby gates and fences. Subtract, add, subtract, add: that’s what childproofing is all about. We have a guest room full of end tables.

We had to lock the toy closet, too, because they would dump the bins. I worked at a Montessori school, so I know that bins are bad – they are just an excuse to dump. Ideally, we wouldn’t have bins of toys. But this isn’t a Montessori school, dang it! My oldest was wonderfully trained to pick one toy, use it, clean it up, put it away, and pick a second. Somehow that is not translating to the “triplets”. What is worse is that now my oldest has even lost his ability to play with one toy at a time, because he is caught up in the chaos! Now we have child-locked even the toy closet, and we adults choose one or two bins to take out for them to play with that day.

I hate hurdling over baby gates to get to the fridge. I hate opening the plastic fence when I want to watch TV at night. But, no matter how much I hate this stuff, I feel the worst for my oldest son. He never did anything to deserve this level of lockdown (not even as a baby!). Before all this childproofing nonsense, I had taught him how to get his own (pre-poured) milk from the fridge, get his own snack from the pantry, make his own sandwich (kind of), get his own books, and get his own underwear and clothes if he needed a change. Now, the kitchen is gated. The upstairs – and, thus, his bedroom – is gated. Even his books with “paper pages” (i.e., not board books) are behind the dang baby fence! And he can only see half the TV when he watches it, because all the media is behind a big fence too. He has lost a lot of his hard-won independence, but he doesn’t complain. Well, if by “complain”, I mean “tantrums”, then yes, he does complain sometimes.

We have considered alternatives. Instead of gating off most of the house, why aren’t we gating them IN? Why don’t we put the baby fence in a circle and trap them inside? Well, that would be a good solution if we wanted to hear even more loud screaming. Also, with twins, one pushed the whole playpen around, while dragging the other twin down behind him inside the fence.

Other alternatives  we’ve considered include hot lava moats, electric fences, and sharp rocks on top of the couch, like anti-pigeon spikes. 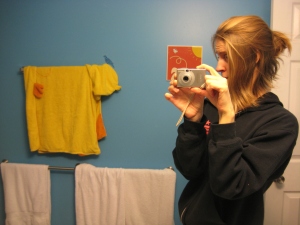 My ponytail looks like this at the end of the day. I usually say something to my husband like, “Honey, I will try not to look so crazy tomorrow.”