A few of my friends have eight or nine kids each. One neighbor, a few houses down, has ten children. Contrary to my expectations, they are the most relaxed mommas I know. My theories are either:

I want to shadow them for a day. I want to be their apprentice. Be their mother’s helper. I demand that they write a book or a blog so I can get inside their worlds. Do they want to take a sledgehammer to their to-do list at 4:00 PM? Or do they not even have a to-do list?

The word on the street (the SAHM street) is that after four children, it doesn’t get any harder. Apparently, having three to four kids is the most intense, and after that, they begin to take care of themselves and/or each other.

However, twins change the equation entirely (as does having a special needs child). A woman in my circle, who is a mother of eight children, recently cared for a set of three-year-old twins for three days. She had 11 children under her care for a long weekend. Afterward, she said to the twins’ mother, “I don’t know how you do it every day! Twins are completely different.” A mother of EIGHT doesn’t know how WE do it?! Game-changer. It made those twins’ mom (and me, another twin mom) feel completely validated and relieved. Finally, finally, we have some anecdotal evidence that what we do is ridiculously hard and abnormal.

Mom math: Having two three-year olds is not even remotely like having one two-year old and one four-year-old. A mother with two small children that are properly spaced might invite us to a nice adventure. But a twin momma would have a much harder time saying “yes” to the zoo or to the restaurant. The best example I have about how having a twin is different is the Parking Lot Double Tantrum Situation of 2015.

Have you ever seen a twin toddler tantrum in public?

See, the thing is, only one twin at a time ever gets mad enough to have a meltdown in public. But that twin causes the other twin to join the meltdown, and thus, the unfairness of motherhood is evident. In the Parking Lot Double Tantrum Situation of 2015, Twin B just decided he didn’t want to ever leave the gym daycare when I came to pick him up. Was he sick? Had something happened? Was he exhausted? Whatever the case was, we had to get out of there.

He screamed on the floor. I tried Nice Mommy, Bribery Mommy, Mean Mommy, and even Batman-Voice Mommy. When all that failed, I heaved his 37 pounds into my skinny arms and dislodged my scoliosis back. He wildly kicked and screamed and writhed in my arms like an angry octopus. And, with my octopus, I run into my (bemused) weight-lifting trainer in the lobby. Now, if you had a singleton, or evenly spaced children, your embarrassment might have ended here. Red-faced, you heave the tantruming child into the minivan and drive away. End of story.

For a twin mom, however, that is not the end of the story. I also had sensitive Twin A trailing along. At first he was mildly concerned, but obediently followed me and his octopus brother into the gym lobby. Twin A’s worry soon turned into whines, and then his whines turned into full-fledged high-decibel wailing. Full-fledged wailing turned into screams with words: “PUT HIM DOWN!!!! STOP HURTING MY BROTHER!!!!!!” 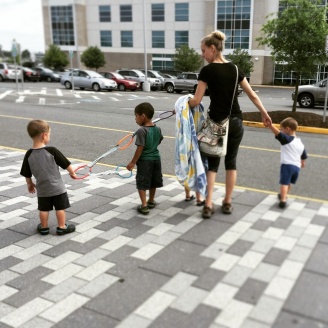 As we reached the parking lot, I could no longer manage to contain octopus-limbed Twin B (screaming in my arms), AND drag screaming defensive Twin A by the hand. I had to calculate who was more likely to die by running from me in a parking lot. Mommy math: Twin B was more of a threat. I couldn’t dare put him down. So I let go of Twin A’s hand.

Twin A defiantly crumpled in a heap in the parking lot, all while screaming at the top of his lungs, “STOP HURTING MY BROTHER!!!!” Twin B is still flailing in my arms and screaming.

Forget being embarrassed. At this point, I know I will need a chiropractor visit as a result of this incident.

And yes, they know they are never allowed to do ANY of these things. Usually they are mostly obedient children. However, they are also children. Children who have bad days. Children who get scared for their brother. There is no reasoning with any child in this state. I used my Batman voice to propel Twin A onto his feet and into the van. I heaved Twin B into the van with the last of my back muscles.

What is important here about the Parking Lot Double Tantrum Situation of 2015 is that this was a twin problem. I’m fairly certain that most mothers who have a toddler tantrum in public would have other children who were either older or younger than that toddler. The older child would be able to understand that his brother was having a tantrum and that momma was not hurting him. The child younger than said toddler would be a baby, perhaps too little to worry about what was happening.

Even though I am sincerely in awe of the moms with eight, nine, or ten children, they wouldn’t necessarily have this double tantrum situation to deal with in public.