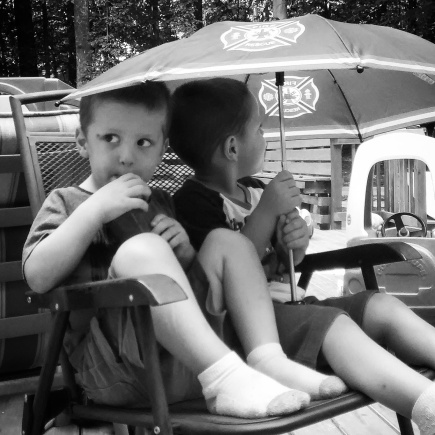 Did I mention that the 100 pound dog is also outside? She eats anything.

I drop my knife and race outside. I somehow simultaneously chase the dog away, clean up the poop on the deck, and praise the child who pooped in the right place. (What’s with the smug look? You mean moms of singletons don’t put potties on the deck? Must be nice.) I make a mental note that we need more trash bags. Lots more. And paper towels. Lots more. And then it’s time to clean two bottoms.

EVERYBODY INSIDE NOW! I MEAN IT!

Dinner will have to boil over. My husband cannot be late again during potty training. It is not sanitary to make dinner and clean up two poops at the same time. I don’t care how many times I wash my hands: IT’S JUST NOT SANITARY.

Need a great diet plan for yourself? Gross yourself out with twin potty training, and you may never want to eat again. Holy crap, there is a lot of crap. I could write a book about this crap. A series of books. This whole thing will be funny someday, right? RIGHT?! I need a reward. A reward that doesn’t involve poop. I can’t see the light at the end of the tunnel. The tunnel made of poop.

I must be really bad at potty training. This ain’t my first rodeo, though. I did manage to potty train my oldest son, who had some issues, AND do so while I was recovering from dying during childbirth AND taking care of newborn twins. So, yeah, I have done this before.

I thought that potty training twins might be easier than training a singleton. I mean, they could learn from each other, right? Cheer each other on? At the very least, I could count on getting it all over with at the same time. Right?! WRONG.

I didn’t predict that, yes, more than once, one twin would be pooping upstairs while one twin would be pooping downstairs. I didn’t know I would have to decide, in a millisecond, which twin is more likely to need my help to get the underwear down / sit down properly / make it in time. And if I decided that it is the twin that is on a different house level, then would I even make it there in time? If not, I’ve got two potty problems to deal with instead of one. Better stick to the twin closest to me and just assume an accident is happening elsewhere. I didn’t predict that scenario.

I also didn’t predict that I would get the twins up from “quiet time” two minutes before we had to leave for big brother’s bus stop, only to discover pee and poop in one or both of their beds. Have you ever showered a toddler or two AND gotten them dressed and shoe-d and out the door in two minutes? Didn’t think so. There was a LOT of crying that day. I was basically pushing them around like a grocery cart. A grocery cart in a game show about racing around for groceries. Didn’t see that coming.

I also didn’t see far enough ahead to realize there’s only one toilet on each floor, but there’s two of them. (Twins have been known to share one toilet. I’ve been forewarned. Not gonna describe that though.) I didn’t realize that we would have to resort to the dumb potty chairs – although they do come in handy for playing on the deck. I didn’t predict that we would have two potty chairs on each level of the house. That’s a lot to clean up. I also didn’t know that my twins would apparently be giants, because all but one of the potty chairs would be too small for them. (Not gonna describe that either. But I’m sure you can use your imagination.) I didn’t realize that they would fight over the one potty chair, even though we had four of them. We might as well have trained them on the real toilet anyway. Argh.

The thing is… the twins are TWINS. They have special Jedi mind tricks. Mind control. I don’t know what they’re doing to me or to each other, but it’s on a whole different level than … everything else. If one twin progresses, the other stalls. If one twin suddenly develops a fear of toilets, he will pass that along to the other. No matter which way it goes, it’s not the right way.

The only thing I know about potty training is that it doesn’t progress in a straight line. And, if twins are involved? I don’t even know what that graph would look like.

As the twins splash in the bath, and my dog sits by herself in her crate to think about just what she has done, and my older son enjoys some good old-fashioned PBS, my dinner burns. I sigh. I pick up my phone and text my husband that he better bring home a pizza, a lot of paper towels and trash bags, and maybe some hard drugs. And I warn him never to be late ever, ever, ever again.

3 thoughts on “Who Pooped on the Deck? And Other Twin Potty Training Nonsense”