She had absolutely no need to apologize to me. What is wrong with this world right now?

When I opened my door to her, I saw that she was a large African-American woman. Large in stature and in personality. She had a loud, cheerful, and commanding voice. She was big-boned, and wearing high heels, and a huge coat and huge earrings and a huge purse. Everything about her was big. I liked her immediately.

In every way, she had the power in this situation. She was older than me; she was more lively than me; she was bigger than me. And most of all, she was a social worker who had the services that I need for one of my sons. I deferred to her in every way.

On her head was a scarf, or a headwrap, tied with a front top knot. It was beautiful.

As she stepped into my home, she immediately pointed to her head and quickly said, “I’m not Muslim. I’m sorry; this is just for my hair.”

“Ma’am,” I said, “You are welcome to be Muslim or not Muslim in this home. Please do not apologize for that. You do not owe me any explanation.” (Besides, we have Muslim family members.)

This happened just two weeks after the presidential election. Hate crimes are on the rise. Racism – and every other kind of “ism” – is out in the open. People are angry. People are scared. And people are apparently apologizing for things that they should not be.

A Black woman, in a position of power, was apologizing to me, a white woman, for wearing a head scarf. It was awful. I don’t know much about African-American headwraps, but I do know that they can be worn for reasons that are cultural, historical, religious, stylish, or just plain practical. And NONE of those reasons are any of my business. 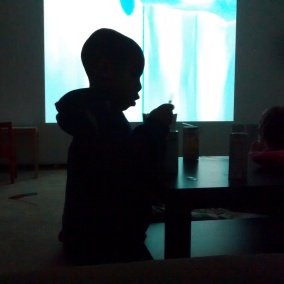 As she walked down my hallway, she looked at pictures of my transracial family on the wall and asked if my one of my sons was Black. “Yes, he is. Isn’t he handsome?” I invited her to sit down and we did an hour’s worth of paperwork together. She began to slip in a few questions here and there that I know had nothing to do with the paperwork.

I have noticed times when Black adult men and women have taken my son into their fold, if only for a minute or two, to reach out to him. To check on him. Not every Black family will like us, or even approve of us, but I often see them pay attention to my son. This was one of those times.

She asked, “What does he say about having different skin than you?”

She asked, “How does he feel about his white brothers?”

Later, she asked, “Have you and your husband had conversations about how the current political climate will affect your son?”

When the visit was nearly over, she said, “You and your husband sound like you are doing the best for your son. I have experienced a lot of racism in my life and in my career, but I still have hope, especially when I see people like you.”

I was touched by her unexpected compliment. I could have just said “thank you” and sent her on her way. But I asked her if she could share any of her experiences with racism. I explained that I was asking not out of nosiness, but out of a desire to gather more information as a mother of a Black son.

She told me of a time that she was warned that a certain child’s guardians, the grandparents, were very racist, and that she shouldn’t go visit them. The social worker went anyway – because she had a job to do. When she knocked on their door, two angry-looking people opened the door. She quickly explained who she was and that she was there for their granddaughter.

Instead of walking away or cursing back, the social worker simply sat down on a chair on their porch. Since she knew she wouldn’t get into the house, she sat there on the porch and said, “Please try to see past my skin color and work with me for your granddaughter.”

The man said, “You have five seconds.”

That social worker didn’t get angry. (How?!) She didn’t even feel surprised. (Why?!) And she didn’t give up. She helped that girl graduate high school that year and even attended her graduation ceremony. The grandparents were there. The grandmother came up to her and said, “I still don’t like your kind, but I appreciate what you did for my granddaughter.”

It is my white privilege that I am shocked by that story.

The social worker told me that she predicted six months ago that Trump would win. She said her white friends laughed at her. She knew. She wasn’t surprised by the results of the election. Not like I was. Not like white people were. Her lived experiences told her that this result was likely. 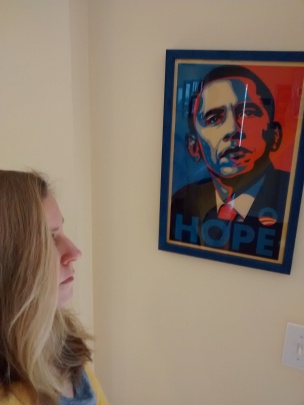 On our wall at home

How much more do I need to learn to keep my son safe? It will never be enough. My white privilege will not protect him. While he’s little and cute, my privilege may shield him like an umbrella. But soon, when he starts to look like more of a man, my white privilege will only hurt him. If my white privilege continues to give me blinders to the way the world really will be for him – if it prevents me from teaching him and preparing him to keep himself safe – then it will harm him.

I don’t ever want him to have to apologize for his Blackness. Or his hair. Or his head coverings (hoodies?). I don’t want him to define “hope” as someone who won’t shake the hand of his kind. But what I want doesn’t matter. I need to see the world through different eyes.

Her eyes. His eyes.