My son almost ran in the road, and I had no voice with which to stop him. My story is a literal one, but the analogies I take from it are numerous.

My sons were playing outside on a mild January day. I was sick that day, lying in bed, feeling guilty for being sick. (Ah, the perks of motherhood!) I had lost my voice, and my children had been uncharacteristically alarmed by my baritone squawking that morning. My husband kindly bundled them up and took them outside with him while he was working in the garage. 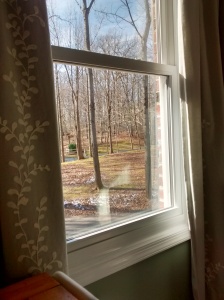 This is my view from my sick bed. The boys were throwing sticks down that embankment. Yes, it leads to the road, and yes, I briefly wondered if they were going to hit any cars with that stick-throwing. My boys know not to go down the embankment, into the ditch, or into the road. However, Twin B is quite … forgetful. Suddenly, I saw Twin B follow a thrown stick and run down the embankment and out of sight. I raced to the window and threw it open, knowing full well I had no time to run to downstairs and to the door. I had no idea if my husband had seen Twin B, and I had no time to wonder. My body completely forgot about being sick as the momma adrenaline kicked in. As I slammed open the window and leaned out, I screamed, “STOP!”

Only nothing came out.

No sound. No voice. No nothing. Having forgotten I was sick, my surprise turned quickly to terror. My son was probably running into the road and I was completely powerless. I had no voice. At all. There was nothing I could do quickly enough. Panic.

Our dog is deaf, but she can hear loud clapping. So, thinking quickly, treating my children like dogs, I leaned out the window as far as I could and clapped as loudly as I could. My hands stung. My heart was on fire, too. Where was he? Would he hear me?

Once in a while, having twins is wonderful: Twin A, an obedient, empathic brother’s keeper, heard my frantic claps, looked up at the window, yelled, “What, Momma?” I pointed to the road with crazy gesturing. Bless his little four-year-old heart: he understood. He retrieved his twin. As soon as I saw them both come back up over the embankment, I raced down the stairs to yell at Twin B with my non-voice. They were fine.

Later, during a quiet moment (probably after they were in bed, because that is the only quiet), I reflected on that feeling of pure terror I had when I realized I had no voice with which I could protect my child. The fear. The helplessness. We often hear versions of the phase “they have no voice” when reading about oppressed groups of people. It made me ponder many of my favorite quotes with a new understanding.

“In the End, we will remember not the words of our enemies, but the silence of our friends.” -Martin Luther King, Jr.

“There comes a time when silence is betrayal.” – Martin Luther King, Jr.

“If you are neutral in situations of injustice, you have chosen the side of the oppressor.” –Desmond Tutu

“Hear Our Voice” –an official logo of the Women’s March

That is why Black Lives Matter. That is why refugees matter. That is why Muslims matter. None of these groups of people have the same voice that I do. I am a middle-class white blonde American woman. Simply being born that way is privilege. I truly believe I am obligated to use that privilege to help others. I am obligated to use my voice for others who have no voice. Staying quiet is no longer an option. Change will not happen if we don’t speak up. Literally. Speak. I never want any mother to feel powerless to help her child.

“For I was an hungred, and ye gave me meat. I was thirsty, and ye gave me drink. I was a stranger, and ye took me in, Naked, and ye clothed me. I was sick, and ye visited me. I was in prison, and ye came unto me…Verily I say unto you, Inasmuch as ye have done it unto one of the least of these my brethren, ye have done it unto me.” Matthew 25:35-40

3 thoughts on “The Powerlessness of Not Having a Voice”