People who know us forgot that I was his mother. 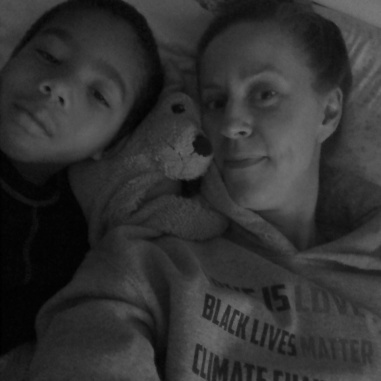 I am white. My son is Black. This is a tremendous invisible burden for him. Being asked to explain yourself or justify yourself as an adoptee is called “narrative burden.” It’s not fair to him, but it is his albatross.

Every.single.time. we are out in public together, something small happens to make us feel “othered”. These tiny things add up, especially for a young impressionable child. “Microaggressions” is a term I have recently learned, and, while it applies to race, I think it may also apply here to transracial adoption.

Yesterday, after Cub Scouts was over, I was following my son out the door. We were close together. Another mother (who knows us) stopped my son from exiting and said, “Wait, where’s your mom?” WHILE HE WAS TALKING TO ME. I firmly said, “I’m his mom” and brushed past her quickly.

Last week, as I was checking my three sons into the gym daycare, the woman at the desk (who knows us) said, “How many children today?” while looking at only my Black son. WHILE HE WAS HOLDING ON TO ME. My white twins were probably doing cartwheels around us, but she wasn’t looking at them. She was looking at my Black son, who was touching me, and basically asking if he counted. I sternly said, “I have THREE CHILDREN.”

The week before that, I took my son to his school’s book fair. He chose his book, and we walked together to the cash register. I was right behind him in line. We were the only two in line. The teacher (who knows us) added up the total, and then said, “Where’s your mom?” WHILE LITERALLY MOVING HER BODY TO SEE AROUND MY HEAD. I followed her gaze over my shoulder and noted that she was looking at a Black family across the room. I said, “I’M his mom” while shoving my credit card in her face.

It’s not fair. It’s a heavy burden. It’s a cumulative effect. It’s one more way the world makes him feel like an “other.” It’s just one more way he may feel he doesn’t belong. He’s getting old enough that this burden bothers him, but he’s not yet old enough to want to answer anyone himself. We talk about these things. I try to give him the language he will need, and the choice to answer when he’s ready. Right now, he is introverted and uncertain about everything. Wouldn’t you be, too?

These microaggressions are probably why he doesn’t want me to eat lunch with him, or chaperone field trips. Unlike white/non-adopted kids, he is asked by peers and adults alike basically to explain himself. No child should ever have to explain why he belongs with his own family.

12 thoughts on “The “Where’s Your Mom?” Microaggressions”