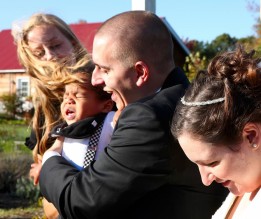 My all-time-favorite photo of my sister-in-law and me. It was her wedding day to my brother, and R was super excited about the portraits. Photo courtesy of Mr. Okayest.

Since I’m LDS, I shouldn’t promote the idea of sister wives. But, dang it, having a sister wife would be AMAZING! Except, of course, for the sharing-my-husband thing. I am not condoning polygamy, but um, what stay-at-home mom couldn’t use the extra help?! My sister-in-law is currently living with us – along with my one-year-old niece – and she kind of feels like a sister wife. However, since she is married to my brother, that thought is just extra gross. So, my brother has coined a new phrase: sister mom. She is my sister mom.

Some fine print: The LDS (Mormon) church does not practice polygamy and anyone who actually did would be excommunicated. Members of the church did practice polygamy in the 1800s, but it was renounced as a practice in 1890 in order for Utah to gain statehood. Our church believes in following “the laws of the land” and we don’t do anything illegal. Any forms of multiple-wife marriages you see on TV (“Sister Wives”, “Breaking the Faith”, “Big Love”…) are NOT my church. Those families are from a variety of offshoots of our church , and NONE are affiliated with the “mainstream” LDS church.* Some of them separated from the mainstream LDS church due to the issue of revoking the practice of polygamy.

Some more fine print: Our prophet has denounced the use of the word “fundamentalist” when describing offshoots of our church, because we believe we stick to our fundamentals just fine. President Gordon B. Hinckley said, “There is no such thing as a ‘Mormon Fundamentalist.’ It is a contradiction to use the two words together.”

Now, having said all that, I am now free to tell you that I can kinda see why those sister wives like their lifestyle. I am a descendent of Brigham Young, the second president of the LDS church, and possibly the most famous polygamist of all time. The number of wives and children he had is staggering.  I guess I wouldn’t be here if it weren’t for polygamy. His wives worked together and many lived in the same houses. Do you think one woman would have been capable of cooking from scratch all day and hand-washing all the clothes and caring for children and running the farm (and, ok, fending off American Indians, according to my ancestors’ journals) out in the middle of Nowhere, Utah?

On the TLC show “Sister Wives”, one man is married to four women. The Brown family members belong to the offshoot known as the Apostolic United Brethren (AUB). Even as a lifelong member of the LDS church, I had never heard of the AUB. ** The Brown wives have said that they support each other by playing to their own strengths. One wife does the cooking, one wife cares for the small children, and one wife works outside the home. Many hands make light work. I guess it comes at a cost: each sister wife only shares a bed with her husband every fourth night. (Many hands make light work in the bedroom too? Ha, sorry.)

Since my sister mom moved in with me, we have four children under the age of four living here. That is far too much chaos for one person, but, with four adult hands, the ratio seems to work in our favor. Like the Brown family, we also divide the work in a way that benefits us. For example, fixing dinner with four toddlers underfoot is not only mind-bendingly challenging, it’s also quite dangerous. (Just think: splattering oil, boiling water splashing, hot stove burners, opening the 450 degree oven….I had resorted to throwing a ball away from the oven to make the kids go chase the ball like a dog before I opened the oven door.) So, we take turns: one of us cares for all four children in the basement playroom, while the other sister mom cooks dinner in perfect silent safe aloneness. It is blissful.

With a sister mom in the house, I am able to run to the store during naptime. I have an adult to converse with during the day, and, thus, I get to use more complex sentences that don’t always have the word “poop” in them. I have a second set of eyes and hands to catch the baby who climbs on top of the picnic table on the deck. (Those of you who personally know my children will undoubtedly know which child did that.) My sister mom does the chores that I detest – such as unloading the dishwasher – just because she is a kind person who takes pity on me. She watches the babies while I spend hours in the bathroom with a potty-training oldest child. And, best of all, *I* get to go to the bathroom alone- with the door closed and everything! Oh, wait, no, the best of all is that Mr. Okayest and I can slip out to a movie after the kids go to bed!

However, downsides to having a sister mom include: 25% more food on the floor during mealtimes, a naughtier dog, and a higher-than-average playtime decibel level. So worth it. I know I could close this blog post with a joke about “as long as she stays away from my man”, but it’s just so gross and weird that I’m not going to even suggest that kind of joke. Except maybe I just did. Anyway, having a sister mom is worth it. I’m not so sure about having a sister wife.

*The most infamous of those groups is the FLDS, which is still run by a jailed Warren Jeffs. (In my opinion, he is one of the most evil men on the planet.)

For further reading about polygamy and our church history:
https://www.lds.org/topics/plural-marriage-and-families-in-early-utah?lang=eng

Vote for your favorite topic and I just might tally up the results and turn one of these into a real blog post. Maybe. If I feel like it. (And by “real”, I mean one without numbers, lists, or bullet points. You know, with paragraphs.)