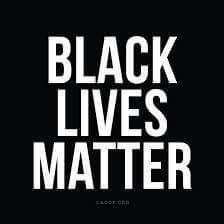 I lost friends. That’s what happened.

I made people very, very angry. That’s what happened.

All because of a simple black meme with three powerful white words on it: Black Lives Matter.

You know what else that profile picture did? It defended my Black son. And it defended every other person made to feel an “other”. I took a stand. I silently protested against the election of a deplorable man. I faced off against people who don’t agree with me, and I didn’t back down. I turned my back on the dirty parts of my Southern heritage. I let go of people who shouldn’t be around my son anymore. I sifted the wheat from chaff.

Did I do it on purpose? Yes. Did I know what would happen? Yes.

Yes, that’s true. I did spark lots of discussion – some of which was even productive. I had people who asked questions, who genuinely were seeking to learn and do better. There were people who thanked me for helping them process some stuff. I didn’t change everyone’s mind. I don’t know if I changed *anyone’s* mind. But I made some people think, and allowed them a space to do so in depth.

The best part? I had people rising to defend me. There were six types of responses to my photo:

I’m an introvert. I can be a shrinking violet at times – but not when it comes to my kids. Like any mother, I will morph into Mama Bear in milliseconds when the need arises. I’ll cut you. Watch me. Electing a man who has emboldened people to use the n-word with glee, scream at minorities, make children fear that their undocumented parents won’t be there when they get home, grab women, taunt the handicapped, graffiti cars and homes and lockers with swastikas and epithets, cause people to hide their sexuality again,  and cause women to take off their hijabs for the first time…. Well, that is not acceptable. My child is one of those. And this is one pissed-off mother.

If you don’t agree with me that Black Lives Matter, we have a problem. If you are willing to talk to me, ask questions, message me privately, read an article I send you, explain your side calmly and then ask me to explain mine…. Well, then, there is hope for us. If you refuse to do any of those things, I have swiftly realized that you are not allowed around my son.

I need to be more careful. We do not feel safe.

Change starts with me. My first change is tightening my circle of friends.

But, yeah, also, 200 comments in 24 hours? I didn’t get nearly that many when we adopted a surprise baby with no notice after six years. I also didn’t get that many comments when I died and came back to life during the dramatic childbirth of my twins. Pfffft.

10 thoughts on “What Happened When I Made “Black Lives Matter” My Profile Picture the Day After the Election?”